Subject to certain exemptions, individuals have a right to be told whether the police hold any information about them. A 'subject access' request/application can be made to the local police, subject to providing proof of identity. However, under the Data Protection Act 1998, the police may not provide personal data if is it considered that to do so would be likely to prejudice policing purposes. Further, the police will not release any information that would disclose the identity of another individual.

There is an 'opt-out' clause (for the Police) in the legislation about the cost of collating information. If the retrieval of information costs the Police more than £400 (15 hours at £27 an hour - this figure was quoted by Devon and Cornwall Police), they can refuse to provide information. This is a very important clause because it give rises to applications for information to be declined. (I feel that this is often an excuse, used by the Police, to not release embarrasing information).

Removal of Data from the Police National Computer Database, INDENT1 and other systems.

All recording now comes under a central system and the auspices of ACRO (used to be known as the 'Criminal Records Office'). For removal you can apply, so long as you have not been convicted of an offence.

For information about the deletion of records from the national police systems,  go to - https://www.acro.police.uk/Services/Record-deletion

Below is a screen shot showing the framework of eligibility, to qualifying and not qualifying, for data removal from the Police National Computer Database (PNC). 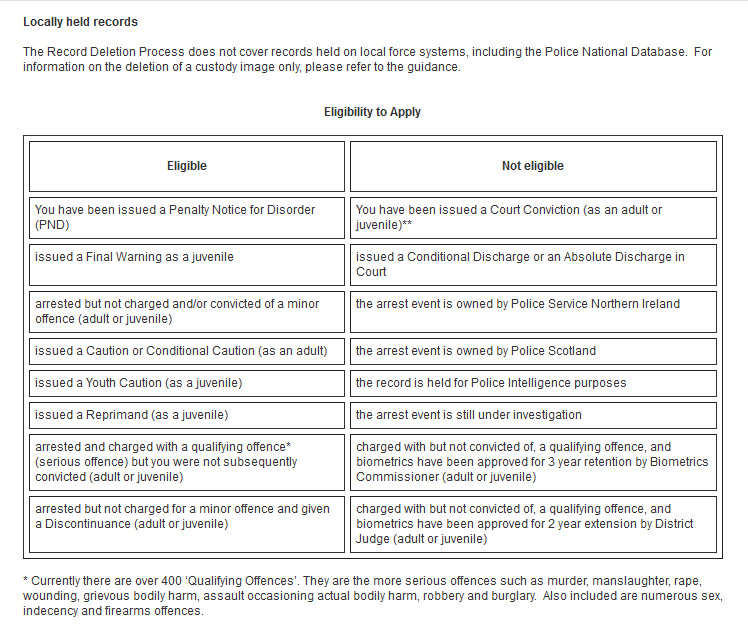 North Yorkshire Police response to a 'Freedom of information' request, I made, asking: "How many persons, during 5 year period, had been arrested in relation to the suspicion of holding and distributing indecent images of children?' and then, a secondary question was introduced: 'Out of this number arrested on the suspicion of the offences, how many were sent for prosecution?", gave the following answer (46 days after I had made the request):

"Due to the nature of our recording systems the information requested, is not in an easily retrievable format. In order to ascertain how many people arrested for this offence were found not to have images, it would be necessary to manually read through all records under the offence title to retrieve the relevant information. This is because there is not a specific category on the Force’s recording system to extract this information, therefore each crime file would have to be reviewed. This would mean reading through hundreds of records and would therefore exceed the cost threshold.

Pursuant to Section 17(5) of the Freedom of Information Act this letter acts as a Refusal Notice."

Hold on! So, they are able to provide information to the 'National Crime Survey', but not me?

Is this is how they avoid answering sensitive issues?

Am I being completely unreasonable in my assumption that they, the Police, are randomly arresting people and then releasing them after no findings and that they will take 'No Further Action'? Leaving the individuals with massive 'stains on their character and automatic entries being put on the PNC, highlighting the arrest for serious sexual offence. The arrest information (and severe doubt about the person's character) will then be released to a potential employer.

Or was I the only one who was NFA'd and all the rest were prosecuted?