Getting any sensible answer has been a complicated process and this page should be called the 'Treacle Road page', (as I have been metaphorically going "up a long treacle basted road with extreme time delays and significant 'filibustering', whilst hurdles are constantly being thrown at me, by services who are in denial to their actions.')

Over the 8 years, I have corresponded, by email and letter, with the Police, Politicians, and other people.
(I will continue . . . .even, if it is just another cathartic excercise and they are not polite enough to respond.)

'True, This! —
Beneath the rule of men entirely great
The pen is mightier than the sword. Behold
The arch-enchanters wand! — itself is nothing! —
But taking sorcery from the master-hand
To paralyse the Caesars, and to strike
The loud earth breathless! — Take away the sword —
States can be saved without it!'

I wrote to NYPPS (by email) on the 17th May 2013, questioning  " . . some ‘procedural’ aspects, in the Criminal Justice system, which does not accommodate those arrested with special needs and does not adhere to any basic duty of care. Furthermore, giving the assurance that the traumatised person is returned to a place of safety, even when abandoned onto other agencies (in my case, the hospital seemed not to be familiar with the circumstances surrounding my trauma and thus ‘sent me on my way’). Abandoned to the elements of the night air. . . "

I pointed out that  " . . . Ironically, the investigating Devon and  Cornwall Constabulary Police Officer (to my former house-sitter), left several telephone messages, over a period of three weeks post arrest, of a compassionate nature enquiring about his welfare. (Even though he was not living in the house).

I did feel the limit to the North Yorkshire Police care for me was no greater than they wanted to cover themselves, in the event that I walked from the Police custody and became an immediate ‘statistic of deaths’ post arrest.

From my initial contact, three weeks later they replied by email requesting a telephone number to talk directly to me. I obligued. They called me. The appointed person dealing with it was quite hostile.  I commented on this in a subsequent email to them. They decided to précis my email as me just wanting my record cleaned off the Police National Computer.

I wrote in the reply email  - "The conversation I had with you as the investigator from the Police Professional Standards, I considered quite hostile and the outcome was certainly an exercise of ‘skirting over’ and ignoring the tenor of my original email. Leaving me to conclude that laws, protocols and guidelines are quite conveniently at hand when needed, but justice is way out of reach . . . . . "

I set out in the email of the 18th July 2013, many questions including:

The Police Professional Standards of North Yorkshire Police did investigate my case. On the 14th August 2013, I received an email telling me they were 'progressing their investigaton and still needed to interview some officers' .

On the 3rd October 2013 (letter postmarked 2nd October 2013) I received the full report from NYPPS and their conclusions. 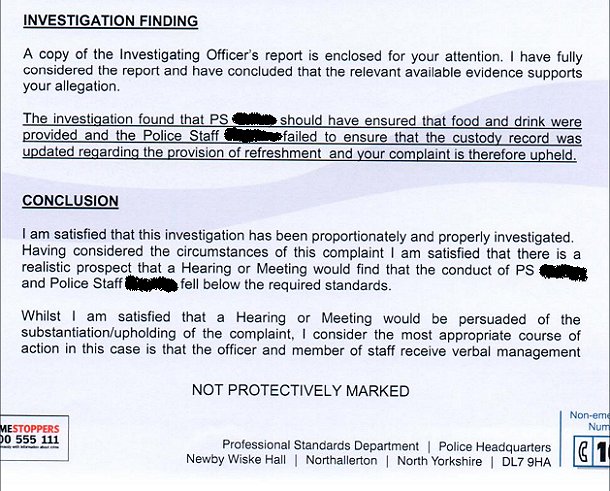 .
The report focused heavily on the 'offering and delivery' of Food and Refreshments. The conclusion was that the Officers claimed they offered me food, which was not recorded in the Custody Record. The disciplinary action taken against them was an internal reprimand and 'get your act together' meeting.

The report went on to say;

All Cells in this particular North Yorkshire Police station are all equipped with Video Surveillance and as such, I was not singled out. There was confirmation that 'my local' force had been instrumental in asking for my arrest and had passed on 'confidential' medical information to North Yorkshire Police.

The Police Custody Officer reported to the investigator, on my conversation about my Medical condition and incontinence claiming  "  the DP (Detained Person) said when asked about his medical condition  " . .  .I do not need my 'meds'" and when referring to his incontinence said: " I can last all day in the nappy".  No recording of this was entered into the Custody Log, although a risk assessment was recorded as having been done. Again no written evidence.My Autism prevents me from using 'flippant colloquial language'. I always associate the use of the terms like 'Meds' as an American word, the same way as the unfortunate garment I wear is not a 'Diaper'.  I would have used either 'medication', 'drugs', or 'prescription'. Suddenly it was claimed that I had introduced the word 'Meds' into my vocabulary. Some might say I am splitting hairs. Is it? This evidence could be recounted in a Court of Law, expecting the Police Officer to tell the exact truth of what I said and not their interpretation of the truth.

Accepting that their 'story' and writings are out of kilter with mine; what is irrevocable is the evidence in the report. There are twelve points where Officer's written statements and the Custody Records are not in alignment! Timings are out, sometimes hours when you cross-reference with records which in themselves are incomplete or there is no recording at all. Some would say they have 'closed ranks' and agreed on a version of their story; compounding my distrust of Police Officers.

The Police seized, what turned out later to be equivalent to four very full large packing boxes of items (excluding the incontinence pads) from my car and flat.  Amongst the items seized was a 3-month-old (sim free and brand new from supplier) HTC EVO 3d mobile/pda/satellite phone. Valued around £450. In May 2013, I was informed by the investigating officer, that my possessions were being released and I would be contacted by the administration department who deal with this part of their operation. He then went on to apologise that my " . . HTC phone has been destroyed during the investigation" (His words).

I naturally assumed that there was a process for recompense. I wrote on the 6th June 2013, to the Legal & Compliance Services Directorate, claiming a replacement. Their reply letter was incredulous. In early August 2013, they talked about there being no compensation and I would have to seek civil action against North Yorkshire Police for the compensation. They did apologise for what they described as 'inadvertent damage'.

I was very angry, I wrote back and told them I would not only seek the value of the phone but the time recovery of all the details stored on it which could include the cost of going to Jersey to retake some of the pictures I had on the phone. I also quoted elements of the law. I had read through the entire 'Criminal Damages Act 1971' about 'intentioned damage' and asked for the Officer who destroyed the phone to be prosecuted. The argument I put forward was the precedent set in law by that 'where there is no lawful excuse and a known risk that action could cause damage to property, then an offence has been committed'.

Lord Bingham (in a judgment) stated that a person acts 'recklessly' with respect to:

My interpretation was, the Officer/Agent working on behalf of North Yorkshire Police knew the risk when 'destroying the phone and had no lawful reasons for his actions'. If it was destroyed through him investigating the contents of the phone or if he decided to send it for destruction - either way, it was criminal damage.

In late 2015, this so called 'destruction' was simply explained by an advisor, warranting the unthinkable. "Spoils of war" , he suggested, " . . . probably one of the light fingered, former squaddy, police officers clocked it as being the lastest mobile phone and walked off with it" . " . . . . . . and you were ever so helpful and did provide them with the access code, so they could easily reset it". Suddenly, I felt embarrased at my naivety and the trust I had in the Police, more so duped by their explanation of events.

By return post, I had an offer to compensate me for the phone. The payment (for the mobile phone only) was made from the Police Crime Commissioner's Office bank account.

"The truth is incontrovertible. Malice may attack it, ignorance may deride it, but in the end, there it is"  - Winston Churchill (1874 -1965)