"You're not depressed, are you," said my former GP, way back. "No" I bleated out, "I'm just fucking angry". The one and only time, with a professional, I steered from 'etiquette' and my doctor had heard me swear. Being the consummate professional he moved on . .

I was in tears, I was as tense as hell and my blood pressure was completely out of control. What was compounding my frustration was the 'depression' in resources to support me. The local mental health service had become pun worthy and  'schizophrenic' with clear 'madness' of the management of their provision locally (much replicated throughout the UK as far as I can determine). The whole system itself is heading for 'suicide'. If not propagating end of life actions, within the client group, it is meant to support!

Any health or community support professional would be aware of Maslows 'hierarchy of needs' . Maslow used the terms "physiological", "safety", "belongingness" and "love", "esteem", "self-actualization", and "self-transcendence" to describe the pattern that human motivations generally move through. Human Needs and Human-scale Development is an economic model, to life, by Manfred Max-Neef and other economists. It moves away from much of the 'psycho-babble' which is a real 'turn off' for many readers.

What has become evident, in the last 20 years, is the growing need to demystify and protect mental health. Certainly in the (North) western European societies; where pressure on life is at the greatest. As family support mechanisms have changed there has become a requirement for public mechanisms of support and intervention of those enduring negative mental health issues.

The demand for support outstrips the supply by multiple times. Much like an unweeded garden, the annoyance that is mental health issues will grow exponentially if it is not tendered. Flagged up by politicians as needing extra funding, in the UK, into the public resource has lead to some minor additional funding, but in real terms provides scant regard to this area of real demand. A disclosed report , released under a 'Freedom of Information' request, highlights an overall spending cut in Mental Health funding, in 2015-16, disregarding pre-election promises by the coalition government of making increase spending (another 'material' inaccuracy by politicians). Only inflationary increases to the NHS provision have happened since.

A person, much like me, who is thrown into dark oblivion of complex thought  (after an arrest) cannot rationalise their decision making, much of which becomes procrastination, failure to engage; then leads to isolation, depression and desperation. They will have a fight on their hands as they battle to engage support by themselves. When it becomes evident to the medical profession, that there is a support need from the localised mental health service (often driven by a desire to suicide) they are not guaranteed any support. In my case it took nearly 9 months to get support, even with the intervention of  (the person who is expected by other agencies to 'cure-all' ) my GP, from the start.

Localised safeguarding processes have gone the way that 'Care in the Community' has panned out. Starved of resources, this has lead to the weakest level of staffing and erratic management; improper facilities and a non-integrated demoralised service.

Surprisingly, I asked for help again in early 2015. This was a major accomplishment for someone who does not ask for help. I was getting more frustrated and angry with my life, so I contacted the local mental health team. 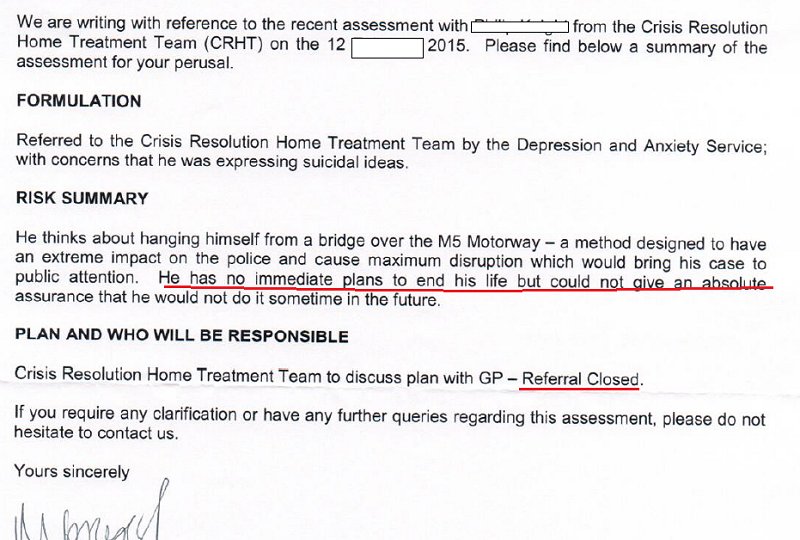 I heard no more from anyone! There is a 'clear message' that my death would have greater value, than my life would ever have. It's become a pointless exercise to seek any help or support.

The true picture of support is one of 'clueless' professionals, who do 'character' judge (as they are only human) influenced by their own thoughts. These professionals have few resources, lack education or experience about the emotional impact on those who are falsely accused. Therefore, support is superficial, temporary and certainly not healthy.